Michael Webster succeeds at creating vivid imagery through the development of candid themes and unambiguous grooves. There's much more to this New York-based tenor saxophonist than the predictable collage of instrumentalist who also writes tunes. Composition seems to be the impetus for Webster's musical output.

Momentus, his second release as a leader, is an alluring collection of accessibility, band cohesiveness, the occasional odd-metered challenge and solid performances. Webster and bassist Ike Sturm sound strong on "Erica's Song," gliding over the waltz tempo with assuredness. Trumpeter Ingrid Jensen lights up the tricky "Indecision" and the left-of-center funk of "Beam Me Up." The latter also features vibraphonist Chris Dingman and guitarist Jesse Lewis in fine form. Jared Schonig keeps a fiery hold on things throughout.

Michael Webster, Momentus: An album that surges forward at near imperceptible speed until it suddenly overtakes the ear. Tenor saxophonist Webster leads a sextet that includes past Jazz Picks Chris Dingman on vibes and Ingrid Jensen on trumpet/flugel. Modern jazz tunes with an ambient personality. Some tracks definitely burn, like on “Train Song,” with guitarist Jesse Lewis’s fiery section, but for the most part, this New York crew performs rainy-day music like they have second homes in the midst of the Seattle scene. Highly Recommended.

The post ECM cool school vibe is alive and well in Brooklyn in the hands of Webster, Ingrid Jensen, Ike Sturm and the rest of the kids that are coming up and marking their paths. Call him Paul Winter's wayward progeny that veered off into ethnomusicology on Mars if you will but Webster is creating a new standard that others will turn into cliché. Tempting as it might be for moldy figs to play spot the influence, of course you can find Miles' space explorations here, but just like Apollo was a long way from Friendship....you catch my drift. Check it out.

This is an album that creeps up on the ear, and like a ocean tide slowly overtaking the shore, before one knows it, the music has completely immersed the listener. For Momentus, Michael Webster has assembled a strong group to perform his original compositions, and the choice of personnel pays off big time. For this is something of an alternate reality of a modern jazz recording… music with a sense of shifting phases just off the fringes of the expected. And as several of this album’s personnel have proven on other recordings, this hazy medium is where they excel.

The music on Momentus presents itself with ambient textures that reveal their substantive side in sneaks and peeks. This approach suits Dingman’s style perfectly, as he’s previously displayed a talent for eliciting a dreamy atmosphere from his vibes. And while Lewis does have some combustible moments on guitar, like “Train Song,” his performance just further proves the hypothesis that guitar-vibes pairings are the perfect synthesis of bright heat and icy warmth. And Webster utilizes his sax to wrap those two up with a bow while simultaneously guiding the ensemble through each song.

Jensen and Sturm pick their spots on trumpet and bass. Of particular interest is the interplay between Jensen’s trumpet soaring over top of Dingman’s methodically constructed vibraphone rhythms. Equally compelling is the engine-caboose effect of Schonig’s drums often meeting the charge of Webster’s sax while Sturm’s bass trails off the sentences off Dingman’s vibes. When those two effects work in tandem, even better the results.

The tune “Beam Me Up” is a notch more upbeat than the other album tunes, and it gives the artists an opportunity to step up and solo a bit. There gets a point during this tune that the album threatens to break the album’s overall ambient texture, but then Dingman meshes into a Jensen solo with a frenetic wave of vibes that transforms into a near drone, and that combo snaps the song into place. And not even the heat brought by guitar and sax just after can do anything to break it.

The title-track is a breakthrough moment for the album. Appearing half-way through the album’s span, it encapsulates much of what has come before and how the album will continue. A driving tempo that plays out like a lazy drive through the countryside, vibes and sax construct layers of repetition that change incrementally while trumpet arcs overhead in a path that drums etch into the ground, and bass and guitar frame the song at opposite edges. The volume and tempo rises and peaks and recedes and quiets. There is a sense of unfinished thoughts, as the ensemble changes direction before waves crest. And it’s the amalgamation of that series of unfinished thoughts that coalesces into a breathtaking mosaic, delivered in a soft and unassuming way.

Nifty how “Train Song,” with its heavy reliance on melodic and harmonic development contrasts with the rhythm-first approach of “Train Song Reprise.”

The album opens and closes with tunes that drift across the room. “First Sunrise” gives hints of things to come.. a little thunder here, a little serenity there, slow loping notes on sax and trumpet contrasting with a rapid pace by bass and drums. Whereas on album closer “Simple Wish,” the ensemble brings a sense of finality to the proceedings… a definitive touch.

An album that slowly unfolds, revealing its excellence in its own time and with a soft touch. It’s not a recording that will require much patience to connect with, but I highly recommend sticking around for awhile until it does finally make that solid first impression.

Released on the Origin Arts label.

Michael Webster has produced a beautiful CD of original music. His ideas as a composer and saxophonist are heartfelt and clear. Keep an eye on him!

The orchestrations are exquisite. The use of strings, woodwinds and brass evokes the genius of Gil Evans and Maria Schneider, while remaining true to a unique and personal voice. It is difficult to make a fully orchestrated and arranged large ensemble CD without losing the essence of the jazz soloist's improvisation. Once again, here Michael hits a home run. His saxophone solos would stand alone powerfully in the jazz quartet even without the beautiful orchestrations behind him.

The track sounds amazing... a first rate ensemble, with all the players contributing strong performances. The multifaceted scoring is quite impressive, especially the intriguing textures achieve[d] between the string[s] and traditional jazz instruments. String voicings and articulations in the lyrical interlude are wonderfully evocative...solo sounds excellent as well. 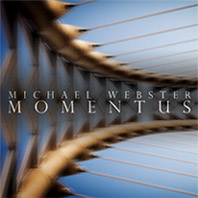 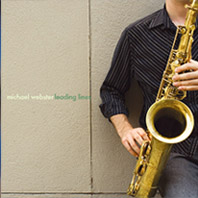